There are a ton of interesting things to do and see in Bhutan holiday packages. This kingdom is the land-locked country located on the eastern slope of the majestic Himalayas which is renowned as the land of “Thunder Dragon” and contains amazing mysteries and unique cultures. In Bhutan, the Gross National Happiness is more important than the Gross Domestic Product and nature and people live in harmony. At an average of more than 2000m above the sea level, it requires a little acclimation to explore the exotic highland. You will have a chance to find out the most breathtaking time in one of the happiest countries in the world, behold the legendary temples and fortresses, discover the exotic tranquil landscapes and attend the traditional festivals with the locals.

Top Places to Visit in Bhutan

This monastery, also known as the Paro Taktsang, is renowned as the most sacred Buddhist temple in Bhutan and located on a sheer rock cliff of the Himalayas. The mythology of this religious construction makes it one of the best attractions to visit in Bhutan. It is said that in the 8th century, Padmasambhava (Guru Rinpoche) flew from Kurtoe Singye Dzong to this mountain on the back of a pregnant tigress and meditated there for three years, three months, three days, and three hours. Subsequently, the cave became the “Tiger Nest”. Up to 1672, the monastery was constructed around the holy cave. 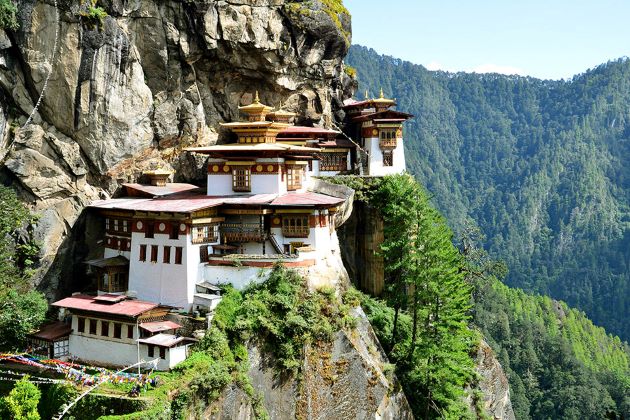 How to get there?

Hiking is the most popular way to approach the monastery due to the separated location. However, those who cannot hike the whole route can hire a horse to ride up to the Tiger Nest.

Thimphu – the Capital of Bhutan

Discovering the fascinating capital city to experience the most surprising things will be absolutely beyond your expectations. Situated in the western part of Bhutan, Thimphu is the distinctive city that will excite your senses with the images only existing in Bhutan such as the transportation system without the traffic lights and wild dogs around the streets. In this capital, you will be captured by the uniqueness of the architecture of Buddhism remaining the country’s long-standing features. What an awesome place to visit in Bhutan!

It is a Buddhist monastery as well as a fortress located on the northern edge of Thimphu. Tashichho Dzong was built in 1216 and has been through the ups and downs of Bhutanese history that was damaged by many factors. It was not until 1968 that this fortress was completely rebuilt and became the seat of the Bhutanese Government. Tashichho Dzong is now the large construction surrounded by beautiful gardens and well-kept lawns. 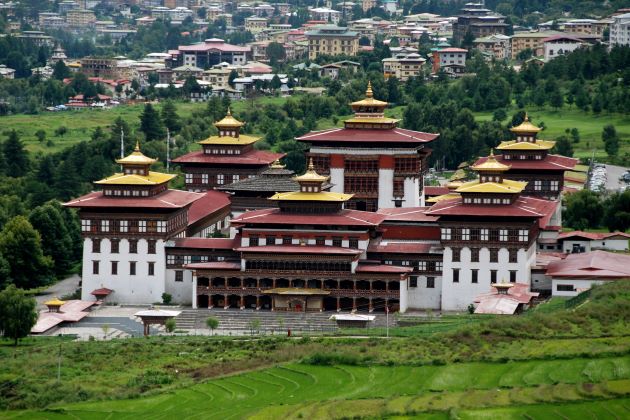 This is one of the most famous temples in Thimphu with a history dating back to the 12th century. Changangkha Lhakhang delivers travelers with a magnificent view of the nearby valley from the top of the temple.

Opened in 2001, the Folk Heritage Museum displays various materials and artifacts of the Bhutanese cultures which will fulfill your curiosity when visiting Bhutan. 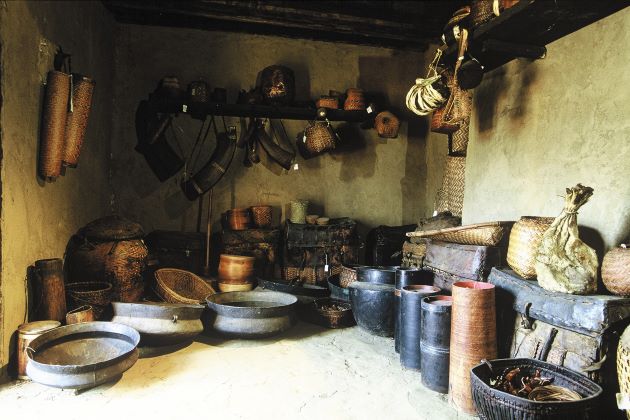 This attraction is commonly known as the Buddha Point in Bhutan for being home to one of the world’s biggest Buddha statues.

The National Memorial Chorten is considered the most iconic stupas of Bhutan. It is built in the memory of the National Third King and now focusing on the daily worship of many Bhutanese people. 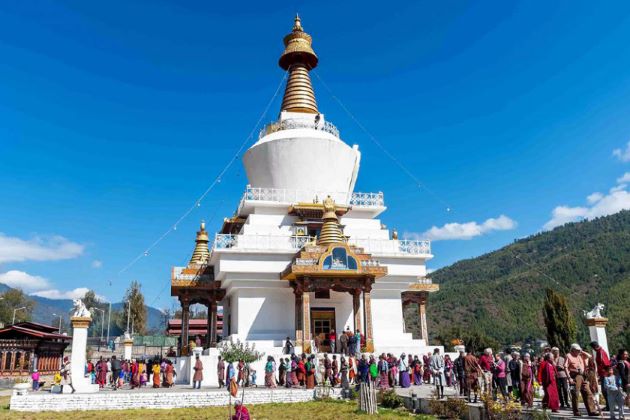 It is said that your trip to Bhutan cannot be completed without a visit to Punakha. This city used to be the capital and political center of Bhutan until the 1960s. Punakha is now famous for the stunning landscapes and ancient architecture reflecting the traditional traditions of its kingdom. Here is the home of Punakha Dzong – the majestic ancient fortress (also known as the Palace of Great Happiness). Constructed in the confluence of two rivers Pho Chhu (father) and Mo Chhu (mother), it is joined to the mainland by an arched wooden bridge where you will be totally mesmerized by the tranquil aura of peaceful rivers flowing softly and gently. In addition, the distinctive architecture of the Punakha Dzong also grasps your attention. If you are fond of adventure journeys, do not miss any chances to visit this attraction, wander across the Pedestrian suspension bridge behind the Dzong and marvel at the magnificent views. 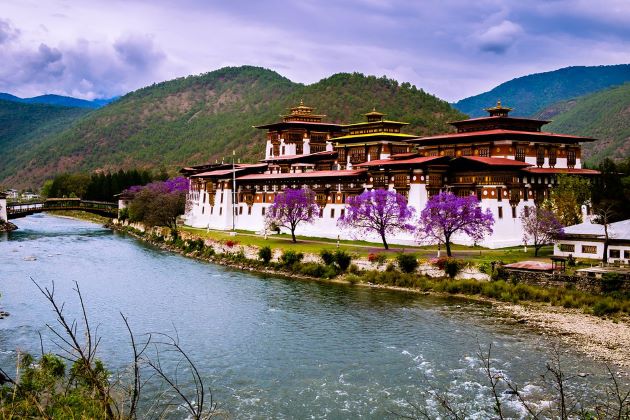 Moreover, Punakha is a very popular destination for rafting adventure as you will have a chance to enjoy the best rafting memories on the rivers offering panoramic vistas of nature. If you are a nature lover, it is wonderful to stroll around the road of the town to behold the most impressive giant cherry trees and admire the picturesque rice paddies expanding to the horizon at the valley of Punakha. Apart from Punakha Dzong, Chhimi Lhakhang temple own the mythology and architecture feature by the phalluses considered to ward off the evils which make this place one of the most well-known temples in Bhutan.

This pass is an ideal destination to marvel at the majestic Himalayas. The weather here often remains misty and foggy but it is still able to behold the magnificence of the Himalayas from October to February. Located in the western part of Bhutan which is about 20km from Thimphu capital, Dochula Pass has never failed to attract travelers’ attention by its beauty and the peaceful aura. Additionally, it is also famous for 108 memorial monuments telling stories of spirituality, bravery, and cultures of Bhutan. If you visit here in the winter, you will see the most amazing experience to feel the chilly weather in the white snow heaven at the height of 3100m and look for snowman’s appearances, according to the Bhutanese legend. 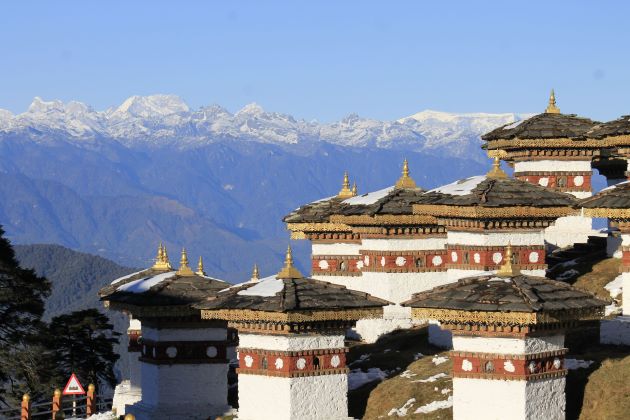 Top 5 Things to Do & See in Bhutan

Joining in traditional festivals in Bhutan is surely the most memorable experience in every holiday packages to this kingdom. They clearly symbolize spirituality and the long-established customs of the country. If you travel Bhutan on the 10th of each month of the lunar calendar, you will have a chance to immerse yourself in the Tsechu – the most vital religious festival in this country. Wearing Bhutanese traditional costumes and immersing yourself in the exciting atmosphere of the festival are the best ways to gain a deep understanding of the cultural identity of the Bhutanese. In a word, we highly recommend you not to miss this festival because you will achieve more than such these things we mentioned above. 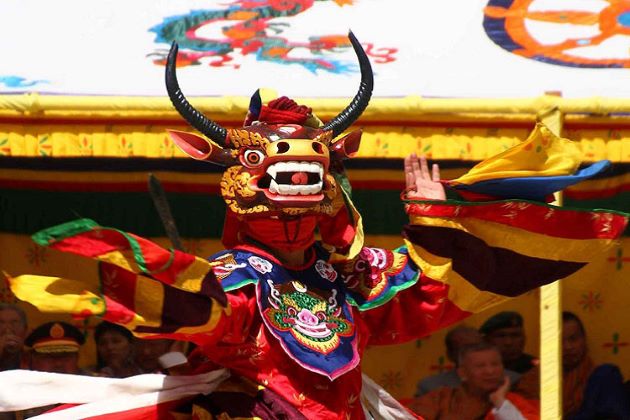 Beside vibrant and colorful festivals in Bhutan, watching an archery tournament – Bhutanese national sport is another type of entertainment. It became the national sport of Bhutan in 1971 so you can see the Bhutanese practicing everywhere throughout the country. Once watching an archery competition, you may feel a little bit surprised by the way competitors try to tease the ones of opposing teams to confuse them then their ally can take time to perform successfully with the incredible distance at about 145m. 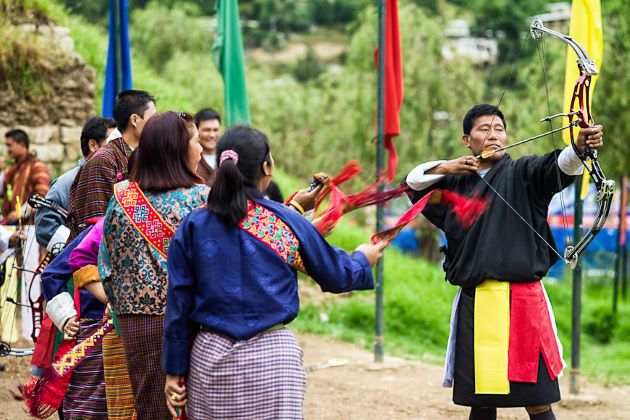 Overnight in the Homestay & Experience a Farming Tour

Staying in handpicked homestays and sleeping on a hard mattress is the astonishing way to experience an authentic Bhutan lifestyle. Living with a local family, getting up early in the morning and quickly moving to the field along the idyllic stream to take care of the crops under the local people’s guidance will leave you unforgettable experiences. Or you can join to make a cozy local meal with the host and enjoy them together. Bhutanese people are super friendly so this experience will be one of the most memorable highlights in your travel in Bhutan. 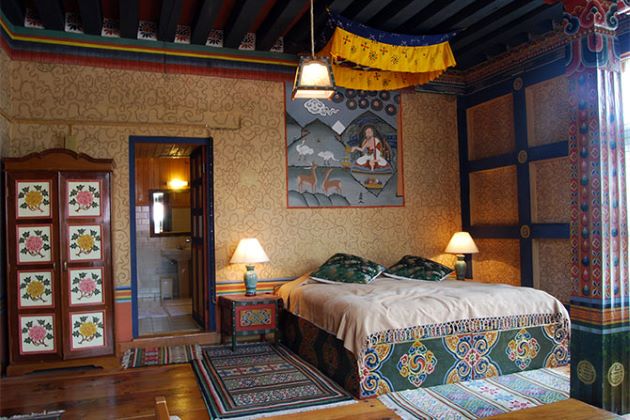 If you visit Bhutan in early spring and winter, fulfill your adventurous journey with interesting outdoor activities such as kayaking and rafting to discover the wilderness of Bhutan. You can have a chance to indulge in the risky game drifting along the high rushing rivers. 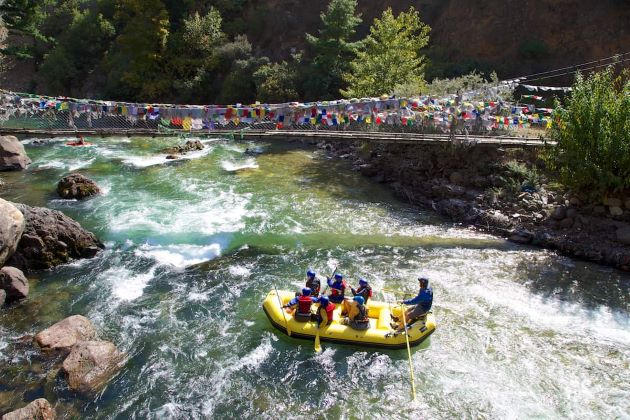 Bhutan is covered by over 70% of forests making it the home to one of the top 10 biodiversity hotspots in the world and various rare birds including endangered species such as Black-Necked Crane or White-Bellied Heron. This is the paradise for bird lovers to admire and take photos of the colorful birds as well as discover the floras and faunas in Bhutan. Therefore, we highly recommend you to participate in birding tours in Bhutan. It will be more than listening to the fresh melody coming from a little creature. 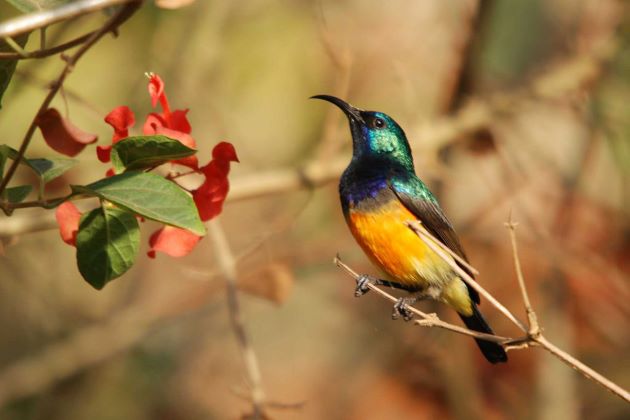